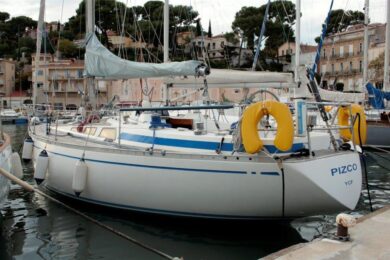 For sale is a classic Swan 38 S&S – beautiful used sailboat from 1974.
How do you describe the sheer pleasure of blue water cruising in three words? Nautor Swan 38. Ours, the PIZCO had one previous owner who raced her for two years. We have sailed her for around 20,000Nm in the western Mediterranean, although we could have ventured much further. In fact, the Swan 38 is eminently suited to long distance cruising – up to 150Nm a day is quite possible (cf Justin Scott’s novel ‘The shipkiller”) .

Designed by Sparkman & Stephens, the PIZCO was built in 1974 by Nautor of Finland to exceptionally high standards. For example, the keel was state of the art when it was first conceived and gives the 38 both significant lift when sailing to weather and excellent performance windward – regularly tacking at under 90° and sailing upwind in 40+ knots. What’s more, the PIZCO is a surprisingly comfortable boat. Adequately ballasted, with elliptical hull sections forward, she will surge in heavy seas instead of crashing – a feature much appreciated by the off-watch crew trying to get some sleep.

A new deck to the original specification
In 2006 we had the deck rebuilt to the original 15mm teak planking specification. Nearly all the interior woodwork (solid teak) has been revarnished to its original gloss in the last few years. Equipped with vintage racing sails (most in good condition) and original rigging, plus a 37bhp Nanni engine with only 900 hours running time from new (1998), the Pizco represents a beautifully balanced combination of sportiness and comfort coupled with a classically elegant sense of style.

She’s whatever you want her to be
Ideal for day cruising as well as longer, more ambitious voyages, the PIZCO has the sort of intelligent equipment layout that allows her to be sailed shorthanded or fully-crewed. Highly versatile, she is in many ways whatever you want her to be. Exciting when a challenge is sought, but gently forgiving when you push things just that little bit too far. Most of all, sailing the Pizco is fun, thrilling and a genuine pleasure. Something we’ve enjoyed proving to ourselves over and over again.