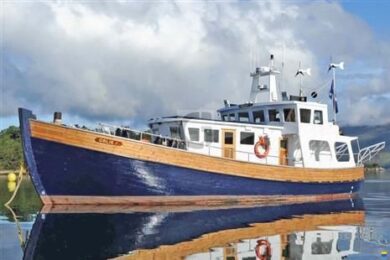 Nicely converted Danish built MFV. Converted below decks to a high standard with 2 double cabins and crew quarters. Currently coded with the MCA for commercial operation 60 miles from a safe haven she is an ideal business opportunity.

Built in Denmark for a Grimsby based British skipper ORLIK was originally built to fish in the waters around Iceland and the Faroes. Her typical Danish lines with the high bow and sweeping sheer with her massively overbuilt structure are ideally suited to operating in these hostile waters.

With her current owners since 2011 ORLIK has taken her owners to Norway, Sweden and through the Baltic sea before returning to Scotland via Germany’s Kiel canal. ORLIK was professionally re-fitted by MacDuff shipyards in 2011-12 before heading off on her Baltic adventure in May 2012.

Fitted out to be a comfortable live aboard which could operate commercially the standard of fit out below decks is of high standard. Her current owners have operated her for skippered charters, day trips and very successfully as a floating Air B&B; attracting overnight cabin rates of over £275.00 in high season.

In regular use she is offered for sale with a full inventory, coded and ready for use as a liveaboard or commercial operation.

ORLIK is a unique opportunity to acquire a vessel which already has a proven ability to generate significant income operating in different manners. The social media, website and Trip Advisor profiles are available to transfer with the boat. We have a large selection of high resolution images available upon request. Viewing is by prior arrangement.