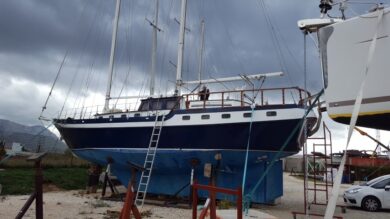 Yacht history:
The first owner was the builder of the yacht, he sold it to a second German owner in 2000, and the present owner purchased the yacht in Greece in 2004 and transferred it to Croatia.

The actual owner of the yacht used the yacht since it is in his ownership for 4 to 6 weeks per year.

When the yacht is not sailing, it is kept on a dry dock place in the marina.

General engine service done in 2010, since then every year engine was running for about 80 hours. 2 Steering positions, outside in cockpit and inside in pilot house.

The ship offers a lot of space in the saloon and galley, and also at the aftdeck, the frontdeck is very nice for sunbathing. The cockpit seats are for 6 persons comfortably for eating and sitting during sailing. This position with the control stand and the seats also offers a lot of safety!

2007 – Removed the masts and new rails with new rubber and Sliders on the sails(Harken), sails for the foremast

3 cabins, 7 berths
Large U-shaped saloon sitting place with foldable table
Front cabin with 1 double bed, and one single bed (Or for 2 kids)
Portside cabin with bunk bed
Starboard cabin with bunk bed
3 Heads with toilet, washbasin and shower (In storage place a toilet pump for puping outside (Installed in 2013)