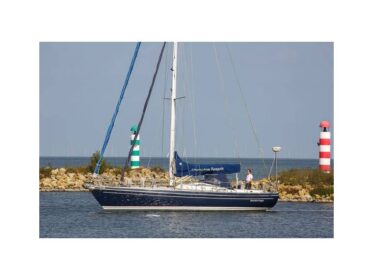 We offer this beautiful pre-owned sailing yacht Victoire 42 to you on behalf of the 1st owner, the construction of the Victoire was started in 2007 at the Victoire yard, the boat was completed under our own management and finally put into use in 2009.

The sailboat has been used very little and at least half of the sailing hours are mainly sailed on the engine. The yacht is in fact often used as a starting ship at competitions in Medemblik, where mainly sailed to and from the starting line. The Victoire is known for its pleasant sea behavior, suitable for long journeys, but also for a relaxing weekend on the water.

The interior shows remarkably few signs of use. What is special about the interior is that the wet cell, usually found on the starboard side, is furnished as an office space. The wet cell on the port side is fully equipped with toilet, shower and waste water system.
The locker on the starboard side can be reached via the office space and is furnished as a technical room, where you will find the generator and the inverter.