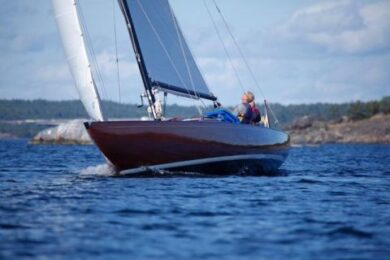 Metal mast and boom.
Sailplan increased since original, greater foretriangle and longer boom.
The spinnaker cockpit is covered at Rosättra boatyard in the seventies.
History

The Sundelin brothers grew up on the boat which even was the tender during the olympic
eliminations in Sandhamn 1968.
The family sailed 1952 to the olympics in Helsinki. Fourth generation is now sailing on the boat. Wind has been stationary in Duvnäs and Saltsjöbaden with trips to Helsinki in the east and Hanö in the South.