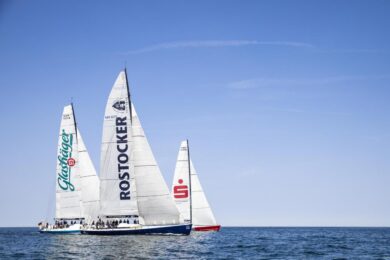 Once the fastest boat in the world by breaking the 24hour world monohull record during a transatlantic passage in june 1997 travelling 435nm averaging 18.1knots.
The boat originally named Toshiba and built for Dennis Conners 97/98 Whitbread campaign she was sold to Sweden and used as training boat for the 2001/02 Volvo Ocean Race by team SEB.

Since autumn 2002 she is based in Rostock and used for corporate charter by the company speedsailing among with former Illbruck and SEB.

For 19 years she’s used with constant interval from april to october. Rest of the year she spends in the shed for maintenance. The offer includes the original aluminium mast, not the carbon one, which is shown at the pictures. The boat is still in original shape and not modified or converted to a racecruiser as lot of her class sisterships.