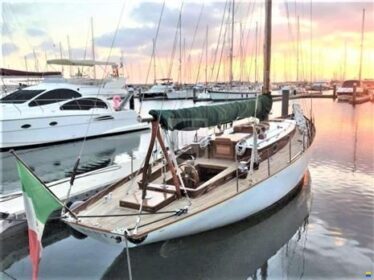 Historic Bermudan classic wooden sailing yacht from the pen of Mario Tarabocchia. Completely restored between 2002 and 2005 in La Spezia and a regular to the podium of the Mediterranean classic yacht regattas.

From the pen of Mario Tarabocchia (who later went on to work at Sparkman & Stephens) and launched in May 1935 at the Pietro Tarabocchia shipyard in to Croatian town of Mali Loinj, MANTA was originally constructed with a view to trans-Oceanic adventures, but later became a regular winner on the Mediterranean regatta circuit.

Remaining in one single ownership for over 30 years which included placing her through a complete and sympathetic rebuild/restoration in La Spezia to return her to her full original glory, MANTA has benefitted from plenty of upgrade and attention in recent times. A hugely competitive boat in classic regattas, MANTA is now ready for her next custodian.

The island of Loinj, in the north of the Adriatic, not far from the Dalmatian coasts, has always been and despite its geopolitical past, a place of great nautical passions: fishermen and sailors but also shipowners and builders.

One above all is represented by the shipyard of the Martinolich family which with Nicola and subsequently Marco , between the late nineteenth and early twentieth centuries, represented the excellence of steam navigation and more, creating more than 9,000 tons of ships for the Austrian navy. (Among these we remember the EMPRESS ELISABETTA – SISSI , of 2500 tons).

But also yachts that for elegance and rationality made Mali Lo?inj, the island of shipyards, a center of excellence for many decades. Among the designers we find Piero Tarabocchia, director of the shipyard until the 40s, author of boats such as the AMRITA of the Duke of Aosta, the CROCE DEL SUD , the LYNX and the DORELLO who became, with the name of MORNING STAR, the holder of a speed record on the Los Angeles-Honolulu distance .

Mario Tarabocchia is formed at this school of elegance and functionality, Piero’s son who after completing his training at the Nautical of Lo?inj begins to actively collaborate on his father’s shipyard. At the age of twenty he designed two yachts: a 17-meter schooner the MARIA LUCREZIA and a 12-meter cutter the OMBRETTA, both of which will be launched in 1939.

The collaboration with Niccolò Costanzi , a naval engineer expert in passenger ships, at the joined Cantieri dell’Adriatico in Monfalcone , will also complete his training thanks to which, having moved to the USA in 1956, he will soon become (1960) an appreciated yacht designer for the Sparkman & Stephens studio in Madison avenue active since 1929, with which he will collaborate for over twenty years, proving to be a true world authority in the design of 12 meters SI, among which the CONSTELLATION, the INTREPID, the VALIANT, the CORRAGEOUS, and the FREEDOM.

His school will train appreciated designers such as Mull, Kaufman, Frers and many others, to whom he will transfer his great ability to creatively face the necessary rigor imposed by the great challenges that the sea forces, especially when competing at the highest levels. like the America’s Cup.

A BRIEF OF THE SAILBOAT HISTORY:

MANTA, formerly TOOSA , was built for the Milanese industrialist Dante Ceschina and represented one of Mario Tarabocchia’s first design experiences in the field of naval architecture. Launched on May 1st 1935, she was configured specifically with a view to crossing the Atlantic, which explains the design of her deckhouse, with its low profile and flush deck designed to offer less resistance to the ocean waves.

During the war years, MANTA remained ashore in the port of Rimini, after which she passed through a variety of owners and was renamed PAITAN and later ODILIA.

After a period of relative anonymity (although she was believed to have been owned by a group of Alitalia pilots who enjoyed champagne cruising with their mostly female crew), during the 1980?s was found abandoned in a Fiumicino shipyard and in 1984 MANTA was bought by the lawyer Ernesto Irace. From 1985 onwards, Ernesto competed in vintage regattas across the Mediterranean with numerous victories in Porto Cervo, Palma, Cannes , Naples and La Spezia.

Following his purchase in 1984, MANTA benefitted from a huge amount of care and attention from her passionate owner as well as a complete and careful restoration (during which the interiors were completely redone, bringing them back to the original design) in La Spezia supervised by Franco Giorgetti and Luigi Lang from November 2002 to March 2005 when she was launched again at the Lotti port of La Spezia during a festive ceremony attended by over 120 people.

The symbol of the boat is a bear, which reflects the character of the owner. Orso is also the name of the son of Hyrax, baptized right in the prow of Manta.